The Resident Hostel at the James Milson Village (JMV) complex at Milson's Point on the north shore of Sydney Harbour is a 58 bed low care facility. The JMV complex also includes a dedicated high care unit and a large retirement village. When the Hostel first started benchmarking in September 2009 it averaged under $60 per day for ACFI. Through a focused and energetic approach, the facility is now recognising the true needs of residents more effectively and averaging over $90 per day in ACFI funds. The story of this improvement is described below.

"Unlike the old RCS system, ACFI is not just about recording what we do but rather it is about identifying what the resident needs and then putting this into place"- Kim Pryde, Manager, James Milson Village Hostel (JMVH). This is the recurring but important theme that is mentioned by all managers that have written about the improvements that ACFI has brought about for the facilities that have published ACFI related articles in the QPS Newsletter.

At JMVH, this started with a review of the very first benchmarking results and a resultant strategy to encourage staff to better identify what was happening to, and for, the residents. Any permanent cultural shift in what we do usually requires a great deal of hands on education and support from management and this was judged to be a critical factor for success at JMVH. Indeed, if you have the philosophy as an aged care manager that ACFI is someone else's responsibility you are unlikely to achieve improvement. ACFI is a team process and whether you are the manager, the ACFI assessor, or the staff member working by the resident's side, a good working knowledge of the critical elements of ACFI is not just desirable, it is essential. To achieve improvement, the team at JMVH decided to educate the staff in small working groups to help build confidence and ensure consistency of approach. Educator Ann Maree Vella played a pivotal role in this process working with the facility manager and each and every staff member personally. Changing the way people think is never easy, particularly when their thinking had been entrenched in a system that ran for as long as the old Resident Classification Scale (RCS).

Newly appointed CEO John Kingston has been impressed by the work of the Hostel team and explained some of the changes in thinking in the following examples:

In the old days it was common place for staff to record the progress of Mary in the dementia unit as "Mary had a happy day today" where in fact this was not only not useful for ACFI assessment, but also fundamentally untrue. Mary may not have exhibited a range a difficult behaviours but this was because of the complex set care plan and daily actions undertaken by the staff. The fact that there were no aggressive outbursts during the day does not necessarily mean she was happy. It is so easy to underestimate the complexity of the care we provide.

A similar comment: "Fred needed toileting today," the reality is that Fred needs toileting five times every day and in each occasion it required a two person lift to ensure both the safety of Fred and the staff. It is so easy for staff to underscore what they in fact routinely do each and every day, simply because it is routine or they don't realise the impact of correctly recording the actual events/actions that took place.

Kim and her team also had to focus on how they record their daily resident care. Improvement was needed, and again by working with either small groups or individuals the staff embarked on a process to develop records that are descriptive of what is actually happening, extremely clear and well presented. Ann Maree explains that the new way of thinking has transformed into a new way of writing and this has resulted in: significant benefits for the care planning process; in turn resulting in better care; and, an improved flow of information to both the residents and their relatives. It also provides a much clearer picture for ACFI validation teams. In a broad sense, "good marketing of our services to our residents and relatives means that we have to clearly and eloquently describe how Mary's day has been freed of frustration".

Another important aspect of ACFI management and achieving a balanced resident mix is input into the admission process. Facility manager Kim Pryde takes a pro-active approach. Kim takes at least two tours every month to visit prospective residents and to gauge the expectations that the residents have of their new home. It is common place for Kim to take a call from the ACAT team and then go and visit the prospective resident in hospital or at home and wherever possible Kim will take an active part in both hospital and community based case conferencing processes. This level of networking not only helps to build the referral process but it also provides invaluable insight for the ACFI assessment process. As Kim says "our processes ensure that little is missed". In addition to this, prospective residents, their friends and family are all encouraged to visit the facility. This helps to build a better understanding between the staff and residents at the earliest possible stage and residents and their families are given a great deal of information to take back home. The pre-admission and assessment system developed and implemented by Kim Pryde reached the last round of 55 (out of over 700 applications) in the Innovation Category of the Better Practice Awards.

Both Kim and Anne Maree explain, "our success is built on good teamwork and the strong formal and informal education mechanisms provided by the onsite management group. We also demand that on site management stays connected with the residents and our day starts with a round of the facility as soon as we arrive for work." 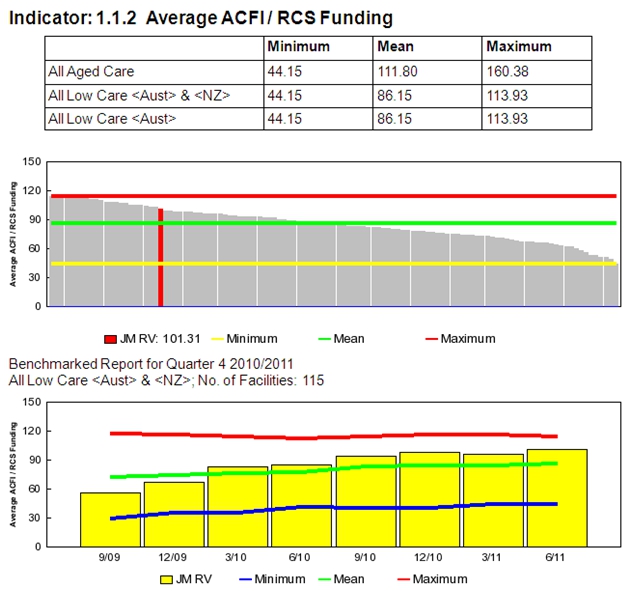 The improvements described above have been amplified by improvement in care processes such as pain management. As improvements in the area of resident assessment have continued Anne Maree Vella has led a project that has achieved the following:

James Milson Village implemented the Pain Management Program in late 2009 in response to the increasing complex care needs of our residents. The pain management program has both helped meet the needs of assessments and also assisted in greater recognition of pain and the benefits of intervention. The impact of the program is clearly evidenced in our benchmarking. The average Complex Needs scores have more than doubled since September 2009 to March 2011. The program is cognisant of the fact that residents are being admitted to facilities at a later and more complex stage of their life; usually after Government sponsored packages at home are no longer viable for health and safety reasons. There is no doubt that the new client of today is in greater need of more care than those of a few years ago.

The Pain Management program reached the final 4 in this year's Health and Personal Care Category of the Better Practice Awards.