Wellness, reablement and restorative approaches are emerging as a powerful way to assist older people change their quality of life through improving their function and independence.  McLean Care is now a leader in this approach and is being sought out by people across the New England and North West of NSW to participate in this program.

The Bush Compass is a unique and innovative system of improving the health and well-being of older people throughout the New England and North West - all in the comfort of their own homes. It ensures that clients who live a distance from a McLean Care physical outlet of Inverell and are isolated because of their health issues and geographical location can have access to physiotherapy services, exercise programs and education to improve their health and wellbeing without leaving their home no matter where they reside.

The Bush Compass Program supplies specific technology. Physiotherapists then regularly contact clients utilising this technology to supply individual physical assessments, exercise programs, education concerning chronic diseases, goal setting and motivation. The program also allows clients to join in group exercise sessions currently being held at McLean Care Ltd (McLean Care) Inverell Wellness Centre as part of its established wellness program. Participants participate from a 300 km radius from Inverell and include locations such as Mungindi, Delungra, Glen Innes, Tingha and Bundarra. These people have difficulty accessing services for a range of health and mobility reasons and this project has overcome these significant barriers.

This project recognises that a significant proportion of older people live in isolated rural communities, and at the same time are suffering from a range of chronic diseases such as: cardio-vascular and respiratory conditions, diabetes, Parkinson’s disease, stroke and depression. In addition, these people often have issues with mobility, strength and functional capacity to undertake basic activities at home.

The Bush Compass, has been awarded the 2015 Northern Inland Innovation Award for Health, Aged-Care and Disability Services. The Awards are conducted by Regional Development Australian - Northern Inland NSW

Specifically, the following case studies define the benefits of the Bush Compass.  They are specifically measurable utilising WHOQOL, a world health organisation scale which assesses participants quality of life and a functional measure of sit to stand capacity. Additionally, participants are assessed for range of upper and lower limb joint movement and pain; and the impact of chronic disease on the person is identified:

McLean Care is now investing in further technology and resources to increase the scope of the Bush Compass.

2. Mr L – is a 55 year old aboriginal male who has re-joined the McLean Care Day Therapy Program. Mr L was referred to the Day therapy Program following a left sided CVA in 2010 & stopped coming as he was involved in other fitness programs run by Community Health.  Mr L returned to the program in 2014 to improve his strength & movement in preparation for undergoing a left total hip replacement.  Mr L has a history of osteoarthritis, CVA, seizures & acquired brain injury.

Initial assessment - On his return to the Day Therapy Program, Mr L was unable to mobilise & was only able to do chair to chair transfers with assistance. He had flexed posture with both his hips & knees held in 90 degrees flexion. He was poorly motivated and need one-on-one supervision to encourage exercise participation. 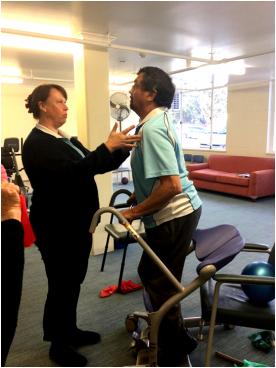 Mr L is now able to stand with the Sara Stedy & only lacks 25 degrees hip & knee extension. He is able to stay upright for longer & perform more repetitions. He has also commenced mobilisation in the parallel bars. He is now able to complete one hour of exercise with minimal supervision and actively participates in all exercises tasks.

Mr L has made outstanding progress with a combination of group exercises & individual functional practice. The other members of the group are very encouraging & cheer his progress. The plan is to continue to increase his strength & functional movement, including progression of his mobilisation in the parallel bars & onto his walker, & give him the best chance of a positive outcome from his hip surgery.

He is still awaiting his hip surgery and last year, he also required lung surgery.

3. Mrs H is a 79 year old lady whose primary goal is to live well at home with husband and 2 x small dogs. Mrs H has very low mobility due to COPD, cardiac disease, spinal degeneration and polymyalgia. She mobilises with a 4 wheeled walker and has been identified as a high falls risk.

Mrs H lives in a very cold climate, which in winter is often affected by snow and ice. Whilst she is able to do the washing herself, she needed to have staff hang out the washing and then return in the afternoon to take washing off the line, fold it up and put it away because there are steep steps to the clothesline which neither she or her husband can access. During the winter month’s staff could not get the washing off the line any earlier as it would not be dry.

Under Consumer Directed Care, Mrs H identified that one of her goals was to become more independent and reduce services. A dryer was purchased for Mrs H from the package funds to enable her to dry clothes, fold them up and put them away herself.

This has promoted her independence and she now receives one service per day. The service time and funds saved has since enabled Mrs H to participate in the community of an afternoon instead of having to wait at home until staff have attended.

a) To learn to speak more clearly and,
b) To learn to interact with his 12 year old son again, as the relationship became strained after his CVA and his son has been living with his uncle for the past year.

This client is now in speech therapy and under his CDC package, and as recommended by his Speech Therapist, was able to purchase a $75 speech app for his iPad so that he could continue learning between formal appointments. Many of his basic words can now clearly be understood.

Additionally, the Package Facilitator learned that this client and his son used to enjoy motorbike riding together. They have now been connected with “Ability Links NSW” and are both preparing to go on a day ride with volunteers!

This client now also goes to watch his son play basketball on a weekly basis.

The achievements for this client would not have been possible without the flexible options available under the CDC Package.

This client and his son are now laughing together and have been able to re-establish their relationship, and this outcome has been a cause for celebration for their extended family.

Upon being discharged from hospital, Mrs G was sent to a nursing home for a period of respite with a view to being permanently placed there. No one at this time had actually asked Mrs G what she wanted, they had just thought this was the best option for her.

As Mrs G was in receipt of a home care package and on the McLean Care waiting list, contact was made and support services and equipment were offered which included ongoing monitoring and support from qualified care staff and a Registered Nurse. Transport was also organised so that Mrs G could attend regular appointments.

Mrs G and her neighbour were very pleased to hear that this level of in-home support was available, as they previously were totally unaware of these options. Respite is now being offered to the neighbour, so that she can take regular breaks and so that Mrs G can become used to other workers in case of an emergency.

As a result of this support Mrs G was able to remain at home in her familiar surroundings and routine rather than being placed in a nursing home prematurely. Even though Mrs G suffered from dementia, McLean Care were able to give Mrs G the choice she deserves to make her own decisions for as long as possible and until such time she is requiring 24 hour care.

*Appropriate consent has been provided to publish the photograph.