'I know we do great work here but we can do better'
Alzheimer's Australia Vic, through its Learning and Development Team is working with a growing number of providers to transform the care provided to those living with dementia. Although the particular outcomes sought by providers vary, they commonly include a desire to improve some aspect of the built environment, activity programs, relationships with families or the culture of the organisation. Many organisations express these improvements in terms of wanting to be 'more person-centred' or to develop a model of 'exemplary person-centred care.'

This article will highlight some of the work TLC Marina did with the support of the Alzheimer's Australia Vic consultancy service. This will explore some of the challenges and rewards of providing services in a Memory Support Unit within TLC Marina (a QPS Benchmarking residential aged care provider). The broad aim was to become more 'person-centred' and in so doing, improve the everyday life of residents with dementia, their families and staff.

'I know we do great work here but we can do better' said Ms Jane Elliott, Manager of TCL Marina Aged Care during our initial visit to the facility. 'I despair when I see the residents just sitting, staring into space and not doing anything for long periods. I want the facility to be a home where residents can be involved in everyday activities and lead fulfilling, meaningful lives.' These comments reflected Jane's vision of the facility as a home and supportive community. Jane's concept of 'home' has a number of components to it including:
The challenge in working together was to build on the good work already occurring and to identify opportunities for improvements to realise Jane's broad vision of enhancing person-centred practice within the facility. 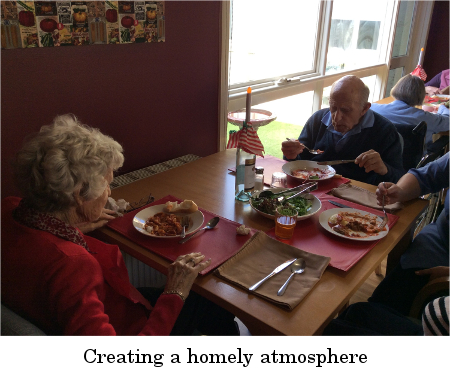 The approach taken was tailored to the goals identified by TLC Marina while reflecting the mission and values of Alzheimer's Australia Vic. The broad goal of working in partnership was to further develop leadership capacity within TLC Marina.

This was to be achieved through the further development of leadership skills and systems to support ongoing and sustainable improvements.

The approach followed a systematic process that involved:
The information was acquired through surveys, focus groups, interviews and the facilities' feedback forms. The process also involved the establishment of a multi-disciplinary leadership team consisting of nine staff from catering, nursing, direct care, lifestyle and maintenance.

During the seven sessions with the leadership team, concepts of person-centred care were discussed, feedback from the focus groups and other sources was analysed, common themes were identified and goals for improving practice were established. Concepts of leadership and the role of the leadership team were also explored.

Through this process the evidence identified three broad areas for improvement and included residents' dining experience, relationships with families and also the built environment. Team goals were to be realised through three separate projects that involved improving residents' dining experience at breakfast time, establishing a carers' support group and improving the built environment. Baseline studies were conducted so project outcomes could be effectively evaluated.

As the sessions with the leadership team progressed, it was rewarding to see teamwork build and creative ideas flow. Despite the pressure of everyday work, the commitment and enthusiasm of most team members continued to grow as the projects developed and the positive outcomes were clearly seen. Reflection was a critical aspect of the work with the leadership team and focused on identifying what was working well, barriers, what could be done more effectively and how learning acquired from this experience could be used to lead future improvements. 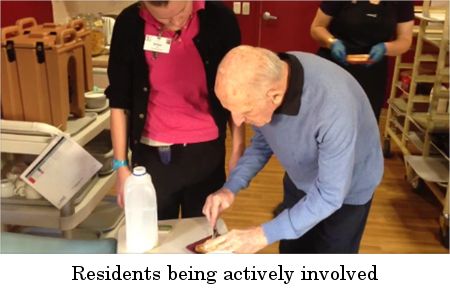 The results of the project work undertaken by the leadership team are remarkable.

'I can't believe what's happened' said Linda Ellis, Catering Manager 'We used to present residents' breakfasts to them on a tray and they would sit there passively. Now residents are involved in setting tables and choosing what they want to eat. Some have taken on the role of 'waiter' and others really enjoy helping to clean up afterwards. The staff are really surprised at how much the residents can actually do.'

The makeover in the physical environment includes brighter lighting and setting up of work stations to engage residents in meaningful occupation. Residents have also been assisted to locate their room more easily by choosing the colour of the door to their room. The makeover has extended to the outside area and included a chicken coup, a cubby house for visiting children, a new BBQ area, a men's shed and a clothes line to encourage residents to actively participate in outdoor activities.

The improvements also extended to relationships with families, who valued the improved communication, the sense of community and the opportunity to actively participate in activities. According to Ms Elliott, 'This project has helped us look closely at our relationships with families, to understand the difficulty they experience as the dementia progresses and the distress they feel when placing their relative in care. Support and education for families is important so they remain integral to care'.

The development of a greater sense of community is very apparent. Residents are involved in all aspects of meal preparation from cutting up vegetables and setting tables to cleaning up. There is more communication between residents and greater involvement in everyday activities which is very rewarding for families.

Despite the remarkably positive outcomes of this project, the improvements remain a work in progress. The real challenge is sustainability. This requires the improvements to be incorporated into the organisation's culture and supported by systems and policies so it becomes 'the way things are done around here.' Sustainability also requires an ongoing process of systematically identifying and implementing improvement based on evidence, awareness of potential barriers and enablers within the organisation in response to change and skilled facilitation. 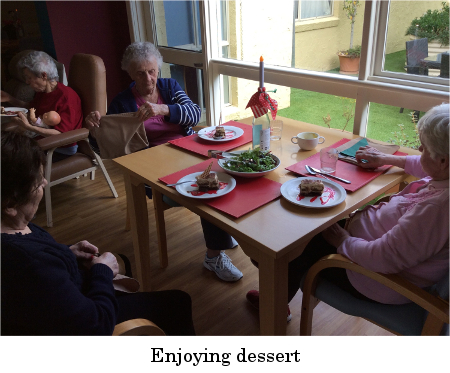 While the consultants at Alzheimer's Australia Vic bring considerable expertise to the role, there is strong recognition of the expertise and leadership that already exists within the organisation. In many ways the role of Alzheimer's Vic is to facilitate the further development of these existing skills within the unique culture of that particular organisation.

The work of translating vision and commitment into action that actually improves practice is extremely challenging. It is dependent on many factors including the vision and commitment of the organisation's manager. 'I'd do it all again but this time I'd improve the way I did it' said Ms Elliott. There'd be a lot more communication and building engagement with everyone in the facility along the way. I've learnt a lot from this experience.'

Jane, we've all learnt a lot. Congratulations to you and the team and thank you for the opportunity to work with you to help you achieve these changes.